Sets/changes a distribution used at one object.

This example shows how to change the distribution used for the Operation Time of Activity 1 to a Normal distribution with an Average of 15 and a Standard Deviation of 2.

Below is an example simulation of two small production lines in which we use this Visual Logic command. Here, both lines are set-up in the same way with regards to their objects, distributions etc.. Activity 1 and 2, both have an Average distribution of 10 minutes. Further, for both, Activity 1 and 2, we specified the same Mean Time Between Failures (MTBF) and Mean Time To Repair (MTTR) distribution. The only difference between both lines is that the first, upper one calls the above Visual Logic command On End Repair, i.e. whenever Activity 1 has been repaired after a breakdown, in order to set its own distribution to Average of 2 minutes.

Activity 2's distribution meanwhile stays Average (10). In that way the upper production line processes work quicker after a breakdown and balances out any backlog from the breakdown period. Additionally, we call the above command whenever a work item enters Conveyor 1 with the IF condition of there being less than 5 work items on the conveyor, it re-sets Activity 1's distribution to Average (10) again.

Observing the simulation, we can get an exemplary snapshot of how well the upper production line “catches up” with any backlog due to a breakdown while the lower line does not achieve that. 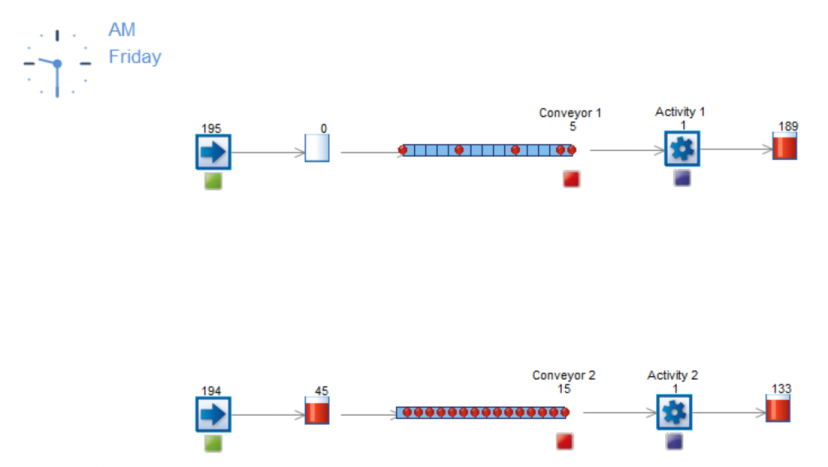