A path network consists of one or more paths. Once a Work Item enters a path network (on a Vehicle) it can travel to anywhere in that path network provided the paths are connected.

A path network consists of a number of connected paths. Use the Path Networks dialog, accessible from View Object by Type menu on the Data & Rules tab to create paths.

Use the NEW path button to create new paths. For each path, inspect its properties by clicking the path name and the properties button. 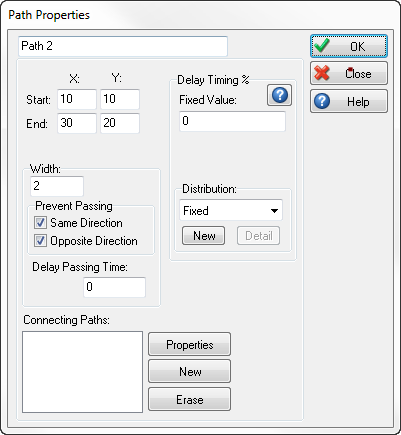 The X, Y, Start , End fields define the position of the path in the simulation. These are in feet (meters) from the top left of the window.

The width of the path defines (along the Vehicle widths) whether a given pair of Vehicles can pass each other on this path.

When width does constrain:

Delays can also be caused to Vehicles because the area around a path is busy with people and other non-simulated items. The Delay Timing % box can be used to interrupt a Vehicle's travel along a path by a desired percentage. No delays occur with the timing delay set to Fixed 0. Otherwise a percentage delay is sampled from a distribution and this is used to stop the Vehicle a number of times along the path to create the sampled delay percentage.

In this case Path 1 is connected to path 2. Position 0 on path 2 is at the same physical location in the simulation as position 10 on Path 1.