The procedure described here can be handled for you, fully automatically by Simul8, but it is described here so that you can fully understand to principles involved.

Once some insights have been gained it is important to test the resulting ideas, especially if there are a number of competing ideas and it is difficult to see visually the best one. Remember that a simulation (usually) contains random numbers and if you are simulating a week's production when you explore the simulation visually, you may be seeing results that apply only to one week (perhaps a lucky week when few of the machines broke down!). A different week might give you slightly (or very) different results.

This procedure described here gives you a step-by-step way to ensure your results are valid. Even if you do not feel a need to go as far as calculating the statistics, you should do the first part and run the simulation with a number of different set of random numbers.

But wait a moment - why are we only simulating a week's production? Why not a year, or an hour? What is the right length of time to simulate? The answer is simple. Simulate an amount of time that makes sense to your client in terms of the performance measure you are using. For example if you simulate the factory for a year and report to your client that you expect the factory to produce 14,500 boxes in a year this might be useful information in itself but might hide the information that any given week's production might be as low as zero or as high as 500. Conversely, your client may be unconcerned by information about the output in any given hour. Choose a time that makes sense to the client. The decision about what time to choose will become clearer when we see (next) what we will do with the information we get.

Lets assume we choose to simulate the factory for one week at a time and with each random number stream we get a different number of products completed by the end of the week. This information can be really useful to your client for making decision with - but it has to be presented in a useful and valid way for it to be of genuine use. This section is all about how to do this.

Once we get to this stage of a simulation study we are normally doing these runs and recording the results because we want to compare two or more alternative decisions that we cannot easily distinguish between visually. Lets assume we have two alternatives and we have run the simulation 30 times for each of these alternatives. For each run (of a week plus warm-up time) we have used different random numbers and obtained the following output figures: 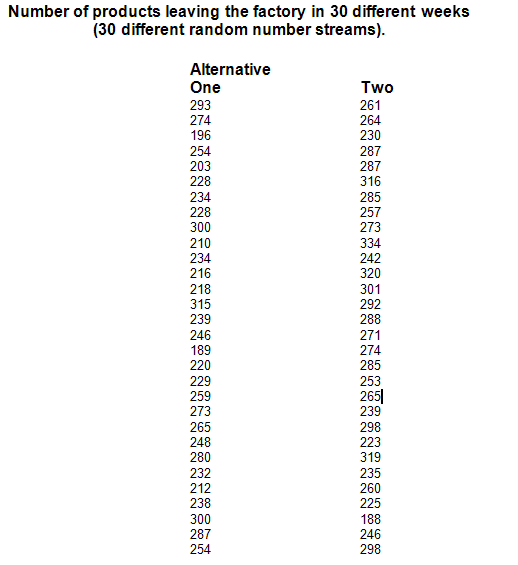 A simple statistical procedure can help here. With limited time to do a limited number of simulation runs we cannot given our client a dead-accurate long term average, but if we could tell our client what range we expected the long term average to be inside this might be good enough.

In addition to the information we have so far we could calculate the standard deviation of the individual results:

We can now calculate confidence limits for our average to report to our client.

As 95% of normally distributed numbers are within 2 standard deviations of their average then:

A picture of this can be useful:

Showing this type of picture to your client can help understanding especially if you change the numeric production count information into profit or cost. The above picture shows that it is just possible to distinguish (statistically) between these two alternatives.

An overlap between the two ranges in that case:

If this happened it would show there is no difference between the alternatives.

It is rarely necessary to do as many as thirty runs. If you do five runs and then do these calculations you will get an idea as to whether five is enough or whether you will need to do more. Even as few as five can be enough - see the note on statistical theory below.

To summarize the procedure:

A bit of statistical theory