You may need to find a suitable 'run-in' or 'warm-up' time for your simulation. Simulations of factories usually need a warm-up time because your simulation is likely to start empty (no products at any of the machines), but real factories do not start each week without any work-in-progress! A situation where you would not need a warm-up time in a simulation might be when you are simulating the start up of a new factory, where you happen to be interested in its first day's operations, or where you are simulating a situation that starts each day empty: like a shop, or a car park, or an airport. However, even in these circumstances you would probably want to separate off the results you get during the early part of the day from the results under peak conditions because knowing the 'average' performance of an operation that never works under 'average' conditions is probably not worthwhile.

Most simulation packages contain facilities to set a 'warm-up' time, during it results are either not collected, or can be separated off from the main results collection time.

But how to you decide how long to make the warm-up time? There is a simple procedure for this.

1. Decide what measures of performance are of interest to you

2. Run the simulation for a short period of time

Run the simulation for another 60 minutes (or whatever time you have chosen) and record how many products left the factory in the second 60 minute period. i.e. the number that emerged between 60 and 120 minutes - not the total at the end of 120. Keep doing this and you should end up with a table looking something like this: 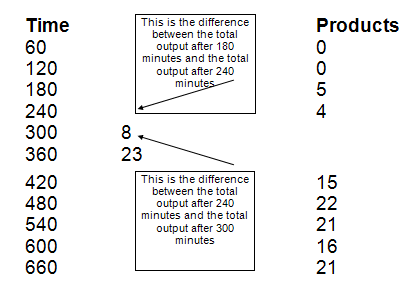 that you could plot in a chart to make it easy to see what is happening: 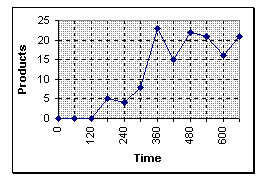 If you plot the chart as you collect the numbers you will be able to see when you have gone far enough. In the example above we can see (by the time we get to simulated time 660) that there is a fairly distinct difference between the figures prior to time 360 and the figures after time 360. So before time 360 the simulation was still 'warming up'.

This example has been deliberately made clearer than often occurs. Quite often the performance measure that you are interested never looks at-all stable. Sometimes during the warm-up time the measure you are interested in is very high, sometimes it is very stable - and becomes unstable once the simulation has warmed up.

You will have to make a judgment when you look at the figures (and a graph) about how much warm-up time to allow. The principle is simply to ensure that the simulation is not in some atypical start-up state caused by the simulation starting empty.

Once you have determined a warm-up time it is worth adding about 20% to it as a safety margin and then using this warm-up time for all your analysis of the simulation unless the structure of the simulation, or the data in it, gets changed significantly. Strictly speaking you ought to recheck the warm up time every time you change anything in the simulation (even the random number streams) - but in practice this would take more time than is usually available! The only harm in making the warm-up time too long is that it can take up a lot of your time when you are running the model.

Significant changes to the simulation might affect how long it would take to warm-up, so you might need to repeat the above process.