Save your code in External Libraries to re-use in other simulations or share with others. Increased productivity and efficiency. No need to rewrite identical batches of Visual Logic code, simply save & re-use in multiple simulations!

What is a Visual Logic Library?

To answer this question, lets consider a simple example. Suppose you have created a simulation with several Visual Logic Sections that you have spent a considerable length of time writing, testing and validating.

Almost every time that you build a simulation you find yourself recreating the sections: Standard_Deviation, Min and Max. Not only is this inefficient, each time you do this there is a chance you mistype and introduce a bug into your simulation. Worse yet, you are not alone. Your colleagues are doing exactly the same in the simulations they are building.

Visual Logic Libraries let you save code in external files that you can reuse and share with others. The best part is that it they are easy and fast to create.

This will display the following dialog that will allow you to define your new Visual Logic Library. 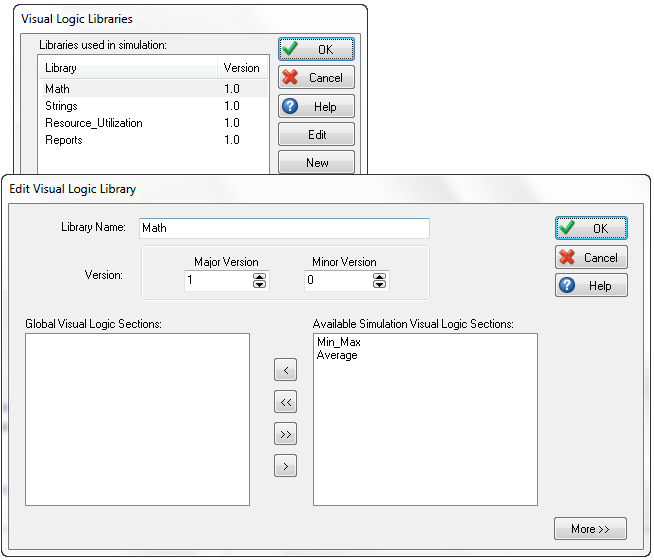 Library Name – Name of the library you are creating/editing.

Version – The version number assigned by you to the library. Each time you modify the library you should increase the version. This will allow Simul8 to determine when a newer version of a library is available.

To create the library, simply select the Visual Logic Sections that you want to include in your library from the list on the right hand side labeled ‘Available Simulation Visual Logic Sections’. Once you have done this, you can add them to your new library using the buttons positioned between the two lists.

The image below shows the new library we have created called ‘MATH’. The list on the left hand side, Global Visual logic Sections, contains the three Visual Logic Sections that we want to include in our library. You will notice that the Visual Logic section Standard_Deviation_Helper no longer appears on either list.

This is because Simul8 has detected that it is required by the library and automatically added it to its list of dependencies. Dependencies include the sections of Visual Logic code and global variables that are required for the Visual Logic Library to function. You can see all of the dependencies by clicking on the ‘More’ button at the bottom right of the dialog.

Click on OK and you will find that the list of libraries has been updated to contain our new MATH library.

To create an external file that you can reuse and share with others, simply click on the ‘Export’ button. To import a library into another simulation, simply use the ‘Import’ button to locate the file on your computer.

When you open your list of all Visual Logic you will see the Visual Logic sections contained in your library (prefixed by the name of the library) are now available, no more retyping and testing!

The user can still utilize the Visual Logic sections in the library when building new code but they can not view or edit the code in the library code. The details of your code are protected! If you wish to allow this user access to your library’s code then you simply have to supply them with the library file that they can place in the ‘VL Library Repository’ folder in their installation directory. When Simul8 opens the simulation, it will check for the existence of this file and if found will grant the user access.

When a Visual Logic Library is created, it is assigned a unique ID. This unique identification is used by Simul8 to handle version and naming conflicts. If you (or another) have created a newer version of a library, Simul8 will detect the version conflict when you attempt to re-import the library and present you with an option to select the library version you would like to use.

Similarly, if attempting to import a completely different library with the same name as a library currently in your simulation, Simul8 will detect this naming conflict and provide you with an opportunity to correct the issue.

This command is only available with Simul8 Professional.