Sets the sample value and percentage values for a single column (cell) in a probability profile distribution. Percentage chance values for columns to the right of the “Column Number” column are adjusted so that the total percentage = 100.

As columns to the right are adjusted to ensure total percentage = 100 you are recommended to only set columns in numerical (left to right) sequence.

Often, the above command is called at specific times during a simulation. For instance, like in this example, we can use it to change a schedule of different product types which are fed into the simulation for each day. In order to do that, we first create the Probability Profile and give it a name. The values are not important at this stage as we will dynamically change them via Visual Logic during the simulation run.

Next, we create an internal spreadsheet in which we specify three product types and their daily proportions that come into the simulation. 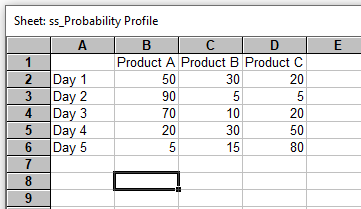 The internal spreadsheet will set the percentage column of the Probability Profile for Product A, B and C which are represented by the sample values of 1, 2 and 3. The sample values are used to set a label “lbl_ProductType” at the Start Point which in turn determines in which production line a work item is routed out to. 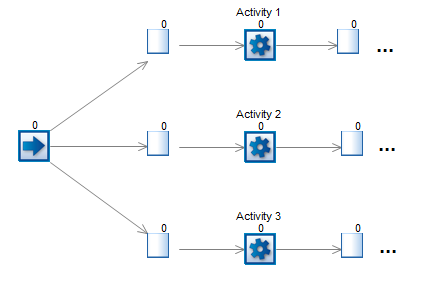 The proportions of product types are changed daily by calling Simul8's Time Check Visual Logic at the end of each day (every 480 minutes, i.e. 8 hours times 60 minutes) in addition to the first minute of the simulation and update the Probability Profile columns according the the internal spreadsheet.

You can find a simulation example on the use of this command here: set_prob_profile_distrib_column.s8