Chrysler increases revenue by $1m per day - without increasing costs

Grew revenue by $1m per day without increasing costs

Met increased customer demand for a new range of models

The Brampton Assembly plant builds the Chrysler 300, Dodge Charger and Dodge Challenger with an annual output of 200,000 units.

With the release of the new models, a substantial rise in customer demand was expected. As a result, the plant was tasked with improving daily production rate from 930 to 969 units to meet this increase.

How did Chrysler use simulation to increase throughput?

Chrysler's simulation team used a base simulation of their Brampton Assembly plant to understand the impact of changing line speeds. With each manufacturing plant having its own base simulation, process improvement changes can be easily made to any aspect of the simulation to help visualize the wider impact on the entire assembly process.

Initially, Steve and his team looked at low performing machines. Using Simul8, it was quickly identified that two specific stations were causing a production bottleneck. As these were automatic machines with no staff working at them, the team were able to use the simulation to look at what would happen if cycle times at these machines were decreased.

The simulation model enabled the team to rank all manufacturing lines based on their performance and easily identify the poorest performing lines to optimize and remove costly bottlenecks. After the first trial, these lines were ranked again and any new bottlenecks were identified. Further trials were then conducted to speed up the new bottleneck lines until the target had been reached.

The chart below shows that the Door Line, Sanyo Loop, Foam Booth and D3 processes were identified as bottlenecks because they had the least block and starve time. 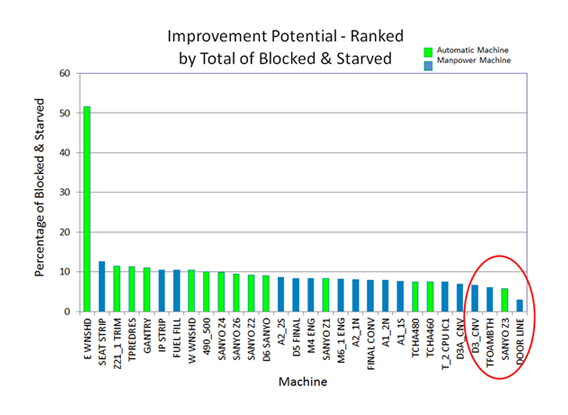 Utilizing factory data in the simulation

Using Simul8, Chrysler were able to utilize real factory data in their simulation. This data had been collected from the plant floor using their Factory Information system which collects the data from PLC, a real-time recording system which records line speed, cycle time, MTTR and MTBF.

The simulation ran over a one month cycle and used existing data imported from Excel, ensuring that the results would be as accurate as possible. This also allowed for the simulation to be validated through comparing Simul8's results to actual throughput numbers and identify if decreasing the cycle times at these stations would improve throughput.

"Simul8 is fast and easy to learn. It’s quick to do a study which makes it an ideal tool for getting the results we need to make fast but thorough decisions."

Using simulation insight to increase revenue by $1 million per day

Meeting the increased throughput target and producing 39 extra units per day, the plant was able to increase revenue by $1,000,000 per day. Furthermore, Simul8's results showed that speeding up these lines would not have any knock-on effect on the overall process, with results of the lines getting better with increased throughput.

The management team at Chrysler were able to utilize this simulation to help make decisions about improving TCF in order to meet the desired throughput. As the simulation used by Steve and his team was created from the base simulation, this could also be further utilized to help make future decisions and drive further process improvement at the plant.

Chrysler’s simulation team continue to use Simul8 across the organization to help make effective business decisions. Simul8 is used for projects ranging from pre-launch studies of new plants and lines, to making existing lines work more efficiently. Steve Lin and his team are also now supporting their tier 1 and tier 2 OEM suppliers to help optimize their own processes using simulation tools.

Find out more about how simulation is used by manufacturing organizations, read more case studies and access a range of learning resources.