Planning for Industry 4.0 with Simulation

There is no one-size-fits-all approach to manufacturing digital transformation.

There have been three major technological revolutions that have expanded the boundaries of manufacturing production and innovation.

From the invention of steam-powered mechanical production, to the introduction of electricity and mass assembly line manufacturing, and most recently, the rise of computerized production using robotics.

Now, the fourth industrial revolution is set to radically transform the efficiency of today’s manufacturing facilities.

Known as “Industrie 4.0” (or “Industry 4.0”), the title was originally coined in 2011 by a German government strategy group who were researching the future of manufacturing computerization.

Industry 4.0 has gone on to become the collective term for a range of advanced robotics, big data and manufacturing concepts, along with emerging technologies such as the Industrial Internet of Things (IIoT), cloud and cognitive computing, digital twins and predictive analytics.

Together, these technologies are harnessed in ‘smart factories’ where Cyber-Physical Systems (such as internet-connected workstations, conveyors or robots) monitor the physical processes of the factory to make agile, decentralized decisions. 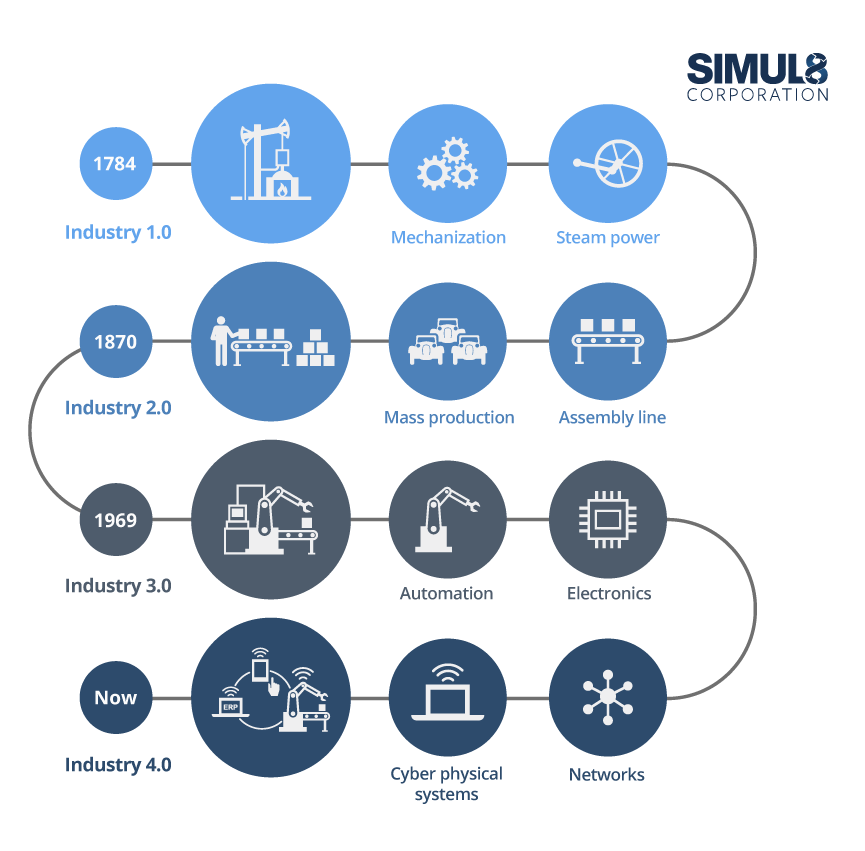 What are the advantages of Industry 4.0 technologies for manufacturers?

Connected factories can detect production issues faster, identify why these are occurring and make corrective changes.

With access to usage data from connected machinery and products, manufacturers can continually improve their products and offer faster, more proactive customer service.

With large capital investment involved, as well as many changes to processes, staff and suppliers to consider, how can manufacturers plan the right approach to implementing Industry 4.0 technologies?

Every manufacturing system is unique, so there is no one-size-fits-all approach to creating a connected factory. At SIMUL8, many of our users are utilizing our simulation software to prototype the implementation of Industry 4.0 principles and find the answers needed to make confident decisions – ahead of any investment.

Below, we have outlined examples of how SIMUL8 has been used to support a range of projects across the four key design principles of Industry 4.0.

The ability of devices and people to communicate and process information with each other via the Internet of Things (IoT).

While working on an advanced ASAR (Automated Storage and Automated Retrieval) system, a simulation was created to understand how improved use of the location data of individual goods within storage could be used to improve customer service times.

The simulation enabled the organization to demonstrate that additional location data could be exploited by downstream work stations to more efficiently select and group batches of work to more quickly meet customer demand.

The creation of a virtual copy of the physical world using sensor data to represent a whole system, like a manufacturing plant or contact center.

A quality-checking process was constrained by the amount of time required for an operator to visually inspect and approve goods. Operators were required to physically attend each station across 20 lines and it was discovered that 40% of the process time was required to move goods into position on a conveyor.

A simulation was created to prove the case for, and size, an entirely new strategy where imagery from each station could be transmitted to operators in a central location - eliminating the impact of non-value add movement time. The simulation results informed implantation costs, return on investment and optimum staffing volumes for the new system.

Information tools that support decision making through the rapid aggregation and visualization of process data, as well as physical tools that help or replace human effort for demanding or dangerous tasks.

There is an increasing trend for simulation projects that test the adoption of AGVs (Automated Guided Vehicles) to boost traditional production and manufacturing processes and replace physically demanding tasks involving the movement of stock.

With the ability to capture the process time variation and product mix complexities of these systems, simulation is an ideal planning tool for testing key design parameters such as the number of AGVs to purchase, overall benefit to throughput, maintenance planning and track layout.

The ability for computer-based systems to make their own decisions for regular events in a system, only seeking human oversight when an exceptional or confusing event occurs.

In a high-mix, high volume production center, a simulation was used to determine the feasibility of allowing a palletizer more storage capacity to ‘rack-up’ a sequence of basic jobs for processing overnight, whilst retaining more complex operations to staffed times of the day.

The simulation allowed a wide variety of test scenarios to be explored, including worst-case events where the machine could become stalled near the start of its overnight run. By proving that the system could accommodate and recover from these occurrences, the simulation was successful in securing buy-in and investment for the process improvement initiative.

Implementing the Future of Manufacturing

Learn why more manufacturers are turning to simulation to help them make stronger, evidence-based decisions in the Industry 4.0 era.


From initial buy-in to assessing return on investment, learn how simulation can become a catalyst for your lean process improvement projects.

Learn more about SIMUL8 for manufacturing

Find out more about how simulation enables manufacturers to make rapid, profitable decisions.