Saved over 80 hours of work over a spreadsheet-based approach

Planning for large-scale hospital evacuations in the event of destructive hurricanes and tropical storms is a year-round effort for the Louisiana Department of Health (DOH). But with limited resources, the state does not have the surge capacity to absorb patients in hospitals outside of the typical storm risk area, or ambulance capacity to be able to safely transfer patients. As a result of these limitations, transferring patients from affected hospitals to facilities in neighboring states by air is the only viable solution.

The movement of patients out-of-state also involves coordination between several local, state and federal agencies, adding to the complexity of planning, both in terms of scale and process, for DOH’s emergency preparedness team.

In order to test the robustness of air evacuation plans, DOH staff needed to evaluate likely volumes of patients to be transferred and understand how many hours the entire process would take under a range of possible scenarios.

To improve the speed and precision of testing, DOH staff turned to Simul8's simulation software and consultant expertise. Simul8 enabled the team to incorporate all the complexities and variability of air evacuations in their analysis, as well as visualizing the process to enhance stakeholder communication and decision-making.

"Spreadsheet-based models of complex problems are too difficult to build. They are also challenging to present to stakeholders who have no knowledge of stochastic modeling. We needed a more visual and engaging approach.

"We evaluated a range of applications, including Visio-based modeling tools, but Simul8 came out on top because of its combination of value, features, support and the visualization aspect."

DOH started the project by collecting likely volumes of patients that would require evacuation. Typically, larger facilities could weather the storm winds and surge of water, but the ability of some smaller facilities to survive the storm was more limited.

Using data from hospitals that had previously needed pre-storm assistance, as well as input from subject matter experts, DOH staff created a basic spreadsheet model with the following assumptions and results:

Other critical considerations also had to be incorporated to be able to accurately simulate the process, but were difficult to model in a spreadsheet, included:

"I’d recommend Simul8 as it’s a reliable product and has been cost-effective to deploy. The consultant and support teams have given us fast, effective assistance with simulation model building and knowledge transfer.

They are hands-down the easiest company to work with in this space."

Simul8 process simulation software was chosen by the team as its powerful features and intuitive interface enabled DOH staff to incorporate the complexity and variability involved in the air evacuation process.

Using flow charts of the process, key data points and distributions, Simul8's consultants collaborated closely with DOH staff to build a visual simulation model of the entire process from patient movement, to the airfield, to flights and destinations and aircraft returns.

The simulation incorporated all the key factors and variability of the process, including:

With the simulation's visuals, DOH staff were also able to demonstrate to stakeholders how the entire evacuation process would play out under a range of scenarios, with on screen charts showing the number of patients transferred in the allotted time period.

For example, the team could quickly create a scenario of 600 patients requiring evacuation from up to 12 hospitals, using 2 debarkation airfields. Flights could be modeled to the 7 receiving airports, based on the number of planes assigned to each debarkation airfield and capabilities of the receiving states. 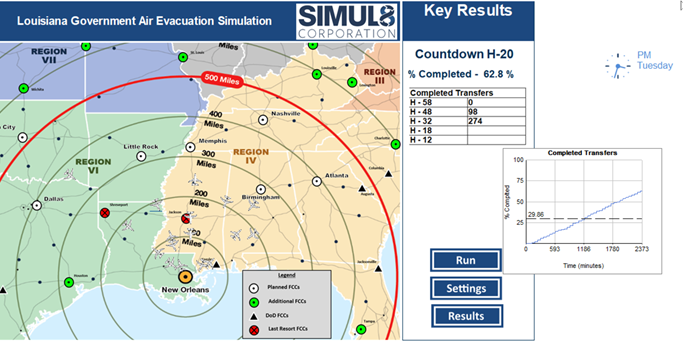 “We have worked with a number of vendor consultants over the years, but Simul8 have emerged top in terms of time from scope development to delivery, cost, and availability. Their team gave us exactly what we needed first time.

They collaborated with us to build a simulation with an eye on the future, allowing us to easily expand the simulation without completely revising the structure. That is rare.”

Simulating the complex evacuation process using Simul8 delivered immediate benefits to DOH staff and its stakeholders. As well as showing the number of patients transferred by air with the timeline for movement, the simulation allowed the team to understand the impact of any changes to the process on the total time taken.

The simulation also helped change stakeholders' mindset from planning focused on definitive numbers to considering the impact of uncertainty and variability, ensuring more robust planning across a range of scenarios.

"The simulation clearly changed the expectation of ‘give us a number’ to ‘wow, we can incorporate uncertainty.’ This was perhaps the most valuable benefit for us”, says Henry Yennie of DOH's Emergency Preparedness Section.

He adds that this outcome would have been much more difficult to reach had a spreadsheet-based approach been used: "I think a conservative estimate of time saved from using simulation is between 60 and 80 hours. I also believe we would not have been able to model all of the factors in the same fashion as we could in the Simul8 simulation."

The team intend to use the simulation to start planning for the 2019 hurricane season. As well as showing the simulation to local, state and federal agencies, DOH staff also want to use it to benefit hospital-level staff. "We want to bring the simulation to hospital level in the coming months so that our evacuating hospitals get to see the “big picture” and the effect of late decision-making.", adds Yennie.

Find out more about how simulation is used by healthcare organizations, read more case studies and access a range of learning resources.