Devised a model for on-demand food delivery, guaranteeing 98% of deliveries completed in under 45 minutes

With the use of cutting edge technology and research at its core, Geisinger has gained global recognition for its outstanding levels of quality, patient service and innovation.

Simul8's healthcare simulation software was utilized by Geisinger to explore the development and implementation of an on-demand hospital food service system to increase patient satisfaction and deliver return on investment.

In order to implement a new food delivery service across a complex network of 18 inpatient units, each containing multiple services with overlapping pathways, Geisinger required a tool capable of testing how system parameters would affect patient satisfaction levels and resource requirements. Simul8 was chosen as a solution for rapid, risk-free testing of various combinations to uncover the most patient-centric, resource efficient food delivery system.

"We had three simple simulation objectives: create a representation of the new model; use this model to determine how the different parameters are going to affect the service levels as well as resource requirements; and finally, use this information to create initial recommendations for system changes." 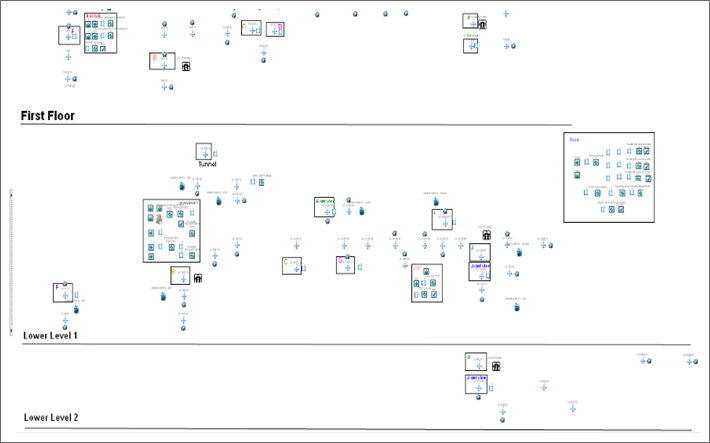 Simulating the new system within the existing hallway network

Utilizing an existing simulation of Geisinger's hallway network from a previous process improvement project using Simul8, Seth and his team could easily add the proposed food delivery as a new component on this existing simulation. This also allowed the team to achieve a better understanding of how resources could be coordinated across departments and services.

Three key parameters were identified and tested to determine potential constraints on the system:

Experimenting with dispatch intervals (8, 10, 12 minutes) and cart capacity (12, 14 and 18-tray cart options), it was quickly uncovered that capacity was not a constraint. Simul8's results showed that the highest possible utilization rate of 49% using a 12 minute dispatch time and a 12 tray cart.

From this analysis, it was revealed that as the dispatch time increased, resource utilization also improved – however, patient satisfaction levels would be compromised as a result of longer delivery times.

Using this valuable information, Seth and his team were able to make initial recommendations to senior stakeholders around the optimum balance between service level and utilization of hospital staff and resources.

Adding realistic constraints to the simulation

Building on the findings from the initial simulation, Seth and his team sought to introduce additional, realistic constraints in to the simulation; operational staff scheduling, food preparation time and cart return and clean up time.

With a 45 minute delivery turnaround time target set by management, the feasibility of this goal was dependant on identifying an optimal staffing schedule and the most efficient delivery and pickup methods.

Testing delivery and pick up scenarios

Three scenarios for delivery and pickup routes were tested; a standard original operation (3 zones, fixed route), a modified pick up schedule (rotational route) and an experimental six-zone facility layout route. It had initially been predicted that the rotational route would provide the most efficient means of delivery and pickup, however, simulation results uncovered that the six-zone layout provided the best results.

Importing staff schedules into the simulation, it was quickly shown that the existing rota would be inadequate in order to achieve the objectives of the new proposed food system. As a result, a new hourly staffing schedule was developed, taking into consideration the additional tasks of food preparation and cart cleaning.

Using the innovative six-zone layout identified in the simulation, 98% of meals were able to be delivered within the agreed service level of 45 minutes.

A new staff work schedule was also identified which provided a balanced, effective employee utilization of 88.4%.

Find out more about how simulation is used by healthcare organizations, read more case studies and access a range of learning resources.